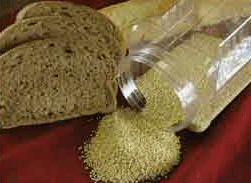 One of the super grains, gluten-free millet is probably one of the most versatile and nutritious of all grains.

It is very rich in amino acids phosphorus and vitamin B as well as lysine, a high-quality protein vitamin. Its iron content is higher than any grain except for amaranth and quinoa.

Although in America it is primarily used as birdseed and fodder, millet is a staple for almost one-third of the world’s population, particularly in disadvantaged regions of Asia and Africa.

Millet is easy to digest and is one of the most outstanding alkaline foods in the world. Soothing to people on diets, it is recommended for those suffering from ulcers and colitis.

Millet has a bland flavor, but if toasted before boiled, tastes similar to hot buttered popcorn. Millet works great as a meat substitute in soups and beans.

Use millet in cereals, breads, soups, salads, and side dishes.

Millet is a Super Grain so it contains complete proteins
Millet is Gluten Free
Fiber Content: 2.0 grams per 0.5 cup

Try toasting the grain before boiling to bring out the flavor. Use the cooked grain as a meat extender. It extends the meat and adds nutrition and fiber.