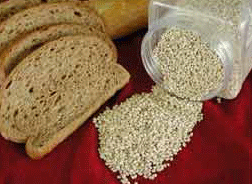 Pearled barley makes a wonderful flour and is one of the ingredients that I include in my WonderFlour.